Tim Weed is the author of a novel, Will Poole’s Island, named a Best Book of the Year by the Bank Street College of Education, and short fiction collection, A Field Guide to Murder & Fly Fishing. His history of education and travel in Cuba began in the late 1990s, when he brought some of the first American students to the country since the Revolution. Since then he has led dozens of trips to Cuba for National Geographic and independently, including a cross-island road trip from Santiago to Havana, multi-week creative writing workshops, and a fly fishing for tarpon and bonefish in the Zapata swamp; he also served as the official interpreter for the Cuban National Choir’s concert tour of New England. Tim teaches at Grub Street in Boston, specializing in lecture series on the craft of the novel, and is a core faculty member of the Newport MFA. He serves regularly as a featured expert for National Geographic in Cuba, Spain, and Tierra del Fuego. 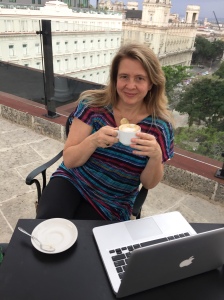 Alden Jones‘s most recent book is the critical memoir The Wanting Was a Wilderness. She is also the author of The Blind Masseuse, named “the best travel book of 2013” by the Huffington Post and a finalist for the PEN/Diamonstein-Spielvogel Award, and the story collection Unaccompanied Minors, winner of the New American Fiction Prize, the Lascaux Book Prize, and an Independent Publishers Book Award for Short Fiction. Alden spent the summers of 2001-2004 in Havana and Cojímar as a creative writing instructor and director of educational programs for American high school students, and, with Tim Weed, co-founded the Cuba Writers Program in 2015. She has sailed as a Visiting English Professor with Semester at Sea and with Royal Caribbean Cruises as a Cuban Culture Expert. She teaches creative writing and cultural studies at Emerson College, and is a core faculty member of the Newport MFA.

Ann Hood is the best-selling author of the novels “The Knitting Circle,” “The Obituary Writer” and “The Book That Matters Most” and the memoir “Comfort: A Journey Through Grief,” which was a New York Times Editor’s Choice and named one of the top 10 nonfiction books of 2008 by Entertainment Weekly. Her essays and short stories have appeared in publications such as the New York Times, the Washington Post, the Wall Street Journal, the Paris Review, Tin House, National Geographic Traveler, Food and Wine and the Atlantic. Hood has won two Best American Food Writing Awards, a Best American Travel Writing Award and a Best American Spiritual Writing Award, and two Pushcart Prizes. Her most recent books are the memoir “Morningstar: Growing Up with Books” and the young adult novel “She Loves You Yeah Yeah Yeah.”

Victor Fowler Calzada is one of the most influential poets and intellectuals writing from Cuba today. He is the author of ten books of poetry and five books essays and has won top literary prizes in Cuba for these works. His most recent books of poetry are La Obligación de Expresar (The Obligation to Express), winner of the Nicolás Guillén prize for poetry in Cuba, and El Maquinista de Auschwitz (The Train Conductor of Auschwitz), winner of the UNEAC prize for poetry. His most recent book of essays is Caminos Corporales y de Escritura (Paths of Embodiment and Writing), winner of the Alejo Carpentier Essay Prize.

One thought on “Faculty & Directors”